How to Build a Bike Wheel - Part Two, or 3-cross Wheel Lacing Made Easy!

Lacing is the 2nd step in building a bike wheel. Before you start lacing your hub to the rim you've chosen, you will need to to the 1st, which is to calculate spoke lengths. If you haven't done that yet and you don't know how, be patient. I'll be doing a write up on that soon. For now you can have this done by your local bike shop to have this done. (Come see me at Fairhaven!)

Tip: Wheels often need different length spokes for each side. I find it easiest to keep the long spokes on the left (Long on Left) and short spokes on the right anytime I’m building a wheel. It makes it that much harder to slip up and pick up the wrong length spoke by staying in this habit.
1)      Disc side up – Start with the rim laying flat on its side, Hold the hub in hand with the disc side up. 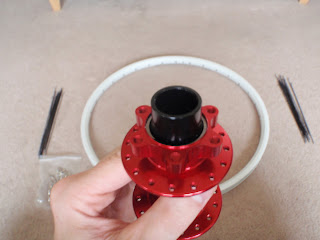 2)      Inserting spokes into hub (1st group) - Drop spokes down into the hub’s top (disc side) flange into every other hole. Note: With a 32 holed wheel, you will insert a total of 8 spokes going this direction. The head of each spoke should face out toward the disc side of the hub. 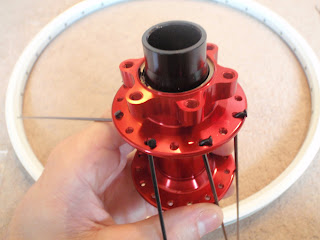 3)      Attach disc side spokes – (a) Locate the valve hole on the rim and run a spoke through the hole to the immediate left of the valve stem hole. Thread spoke nipple on to hold spoke in place. (Optional Step: Lining up the hub logo – This is done for cosmetic reasons, but it is a sign of a wheel builder that knows his stuff. To line up the valve hole with the logo on the hub, choose the spoke inserted into the disc side flange, to the left of the hub logo and run it through the spoke hole to the left of the rim valve hole. When the wheel is completely laced you should be able to see the logo on the hub through the valve hole on the rim.) (b) Attach the other loose spokes to the rim in the same way, spaced so that there is a spoke in every fourth hole. Spokes should be evenly spaced on the rim and should be in a radial pattern and not crossed.) Tip #2: Just start the threads when installing the nipples, don’t tighten too much. Tightening the nipples too far will make it harder to install spokes later. 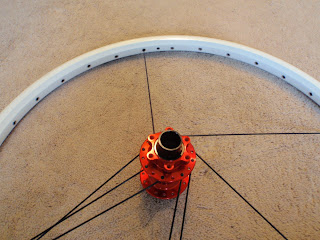 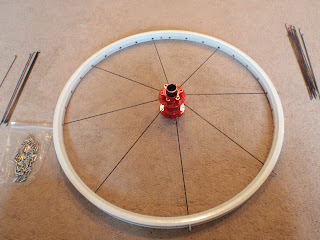 4)      Flip wheel over to non-disc side.
5)      Inserting spokes (2nd group) - Pick out a hole in the top flange that is just to the right of a spoked hole on the bottom flange. Insert the first spoke into this hole, running it through the flange from outside to inside. Insert the other 7 spokes going the same direction in the flange with a spoke in every other hole. There should be a total of 8 spokes going in the same direction with the head of each spoke facing outward toward the non-disc side of the hub. 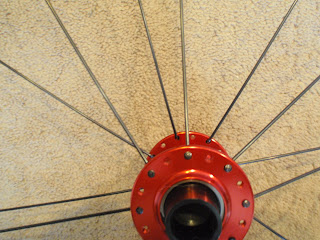 6)      Attach non-disc side spokes - Attach the 8 spokes to the rim so that they are parallel with the spokes on the disc-side. Use the holes just to the right of the installed spokes. Attach nipples to hold spokes in place in the rim. 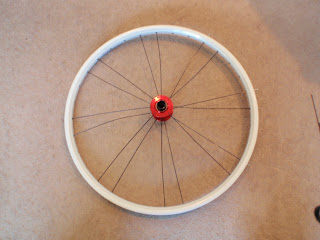 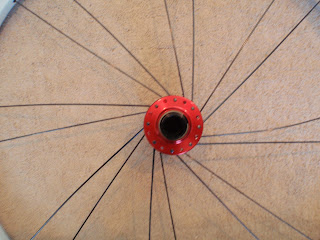 8)      Inserting spokes (3rd group) - Drop 8 spokes through the bottom flange into the remaining holes. Spokes should run in the opposite direction (from inside the flange to outside) as the spokes previously installed. 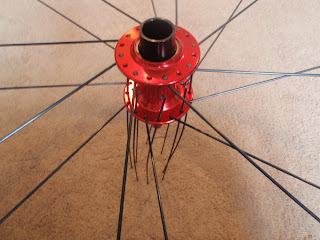 9)      Flip wheel over to disc side maintaining twist between the rim and hub.
10)    Route loose spokes through installed spokes on the same side to get the 3-cross pattern (over-over-under from hub out). Install the spokes into rim eyelet holes just to the left of installed spokes. 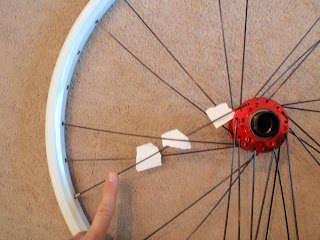 11)    Attach disc side spokes - Attach nipples to hold spokes in place in the rim. Recheck 3-cross pattern on this side. Tip #1: At this point it may be difficult to get enough slack in the spoke to attach the nipple. Jiggle the spokes on the opposite side of the rim to settle the nipples into the rim. Tip #2: Use a spare spoke threaded into the nipple from behind to hold the nipple and keep it from dropping into the rim when threading the nipple onto the spoke. 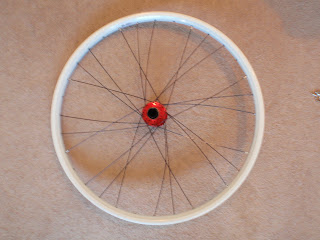 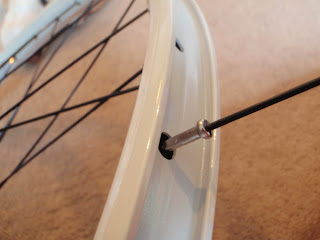 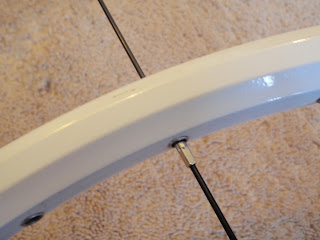 12)    Inserting spokes (4th group) - Drop 8 spokes through the bottom flange into the remaining holes. Spokes should run in the opposite direction (from side the flange to outside the flange) as the spokes previously installed spokes in the flange. 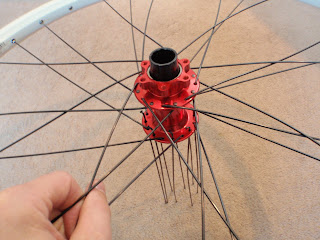 13)    Route loose spokes through installed spokes on the same side to get the 3-cross pattern (over-over-under from hub out). Install the spokes into rim eyelet holes just to the right of the installed spokes. 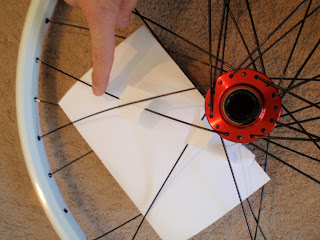 14)    Attach non-disc side spokes - Attach nipples to hold spokes in place in the rim. Recheck 3-cross pattern on this side.
15)    Finished! 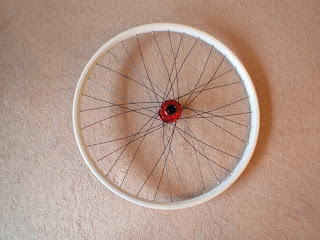 Sweet!  At this point, you should have a wheel laced in a 3-cross pattern that is ready for tensioning and truing. And you thought this was difficult.

Thanks to Steve Farell for his help on this article. Thanks Steve!
Posted by manualmike at 7:16 AM

manualmike
I'm over 40, but I'm still 12 in my head. I used to ride my bike a lot but then I had a family, so now I ride when I can (It's OK though, they are really worth it!) I ride mountain bikes. I enjoy all-day, all-mountain epics (I mean long, long rides), cross-country spins on a singlespeed, lift-access or shuttling with a DH bike, rallying at the local skate park on rainy days (a recent discovery), but mainly I like to jump. My hardtail dirt jumper is the bike I like to ride the most, but it may just loose out to my new toy: a brand new 4 inch travel 2011 Specialized SX. Let me just tell you, this thing is soooo much fun! I love digging in the dirt and I help maintain the local dirt jump park. I'm all about progression and stepping up my abilities but I'm a firm believer in calculated risk. That means: I will go for it, but I put in the practice time to make sure "it" goes well. I've made more progress in the last 2 years than I have in the last 10 and there's more to come. Progression is what I'm after. That and riding with good people and having a great time. -mike